Didsbury going for the treble

DIDSBURY Golf Club’s Mixed team made it a double with a solid display and a good depth of talent to take the Mersey Bowl at Northenden to add to the Ladies Mersey Shield won a few weeks ago.

It is only the second time that the club has enjoyed the double- the last being in 2005.

Now they have their sights on a new record treble as the Men’s team look to win the Men’s Mersey Shield at Chorlton next week.

Comps and Handicap secretary Peter Young found an ideal partner in Georgina Mosquera, who had the best score in the Mersey Ladies Shield with Adele McNeillie, as they posted an impressive 43 points which was matched by Ian Swindells and Sally Lamb to give a solid base for the team.

Providing great support were Fraser and Jeannie O’Neill and Mike Campbell and Margaret Lloyd both with 41 points, Steve Worrall and Victoria Swift 39 and Ed Cervenka and the ever-reliable Bev Hopcutt for a total of 245, five more than hosts Northenden and Sale ahead of Chorlton 229 and Withington 217.

The top individual score of 44 points came from Northenden duo Roger Malhari and Estelle Spence, one more than Peter Young and Georgina Mosquera, who won a cpo from Northenden’s John and Hazel Foster for the runners-up berth.

Another great day for Mersey Mixed golf excellently hosted by Northenden with their Captain Gary Aspinall handing the trophy over to Didsbury Captain Barry Wynter and Lady Captain Louise Biddlecombe to set off some well-deserved and well-practised celebrations. 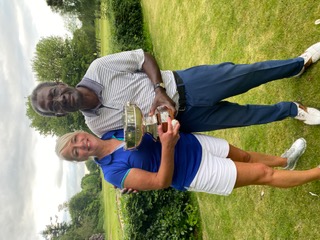 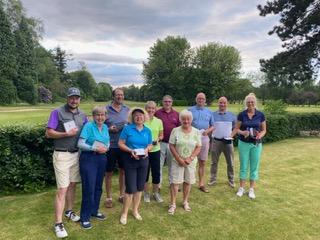 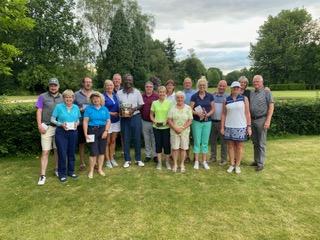