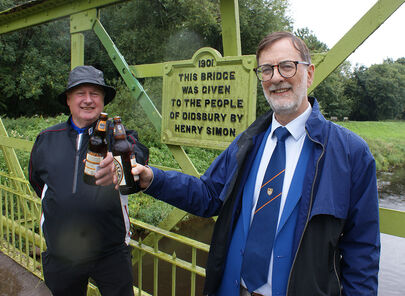 DIDSBURY Captain Alan Collins had a very busy day on and off the course as he enjoyed meeting up with many of the players in a full field of over 125.

Alan. along with the players, had to endure some depressing weather which saw long spells of rain making playing conditions difficult, on a course in splendid condition,  with very few beating par.

But as always someone does the business to lift the top two trophies and the Lavelle Trophy for the best nett score was taken by Richard Nicholson with a neat 76 -10=66 card taking him a shot clear of Andy Turner who won a cpo from Stephen Hall.

Also in the prizes was past Captain John Kirk who was top vet with 68.

The Captain also took time out for the long-standing tradition of meeting up with his Withington Golf Club counterpart Stephen Wells on Simons Bridge over the River Mersey to enjoy a drink and have pleasant chat before resuming his busy day at Didsbury.

The clubhouse was pleasantly busy during the day but due to the Corona virus there was no prize presentation etc and hopefully this will be arranged later in the year.